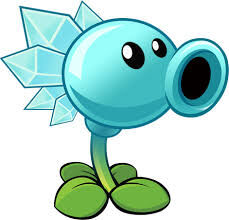 Like Peashooter But blue and has 5 icicles on his Head

Snow Pea is caring to Peashooter but Loves to prank him.Alot.They can get into Arguements.Snow Pea is 2 minutes 11 seconds older than Peashooter.

They are Close friends and hang out a lot.Like Peashooter,He tries to tell her about Wall-Nut's Crush on her but always fails.

The love intrest of Snow Pea.They dislike Marigold.They hangout when they can.And when they do,Snow Pea acts like a jerk to Peashooter Sometimes.

Snow Pea despises her Because She kidnapped him Because of Her EXTRA EXTREME crush on him.

They are friends.But Whenever Wall-Nut screws up around Sunflower ,He says "Not cool dude."

Retrieved from "https://plants-vs-zombies-awesome-adventures.fandom.com/wiki/Snow_Pea?oldid=4291"
Community content is available under CC-BY-SA unless otherwise noted.