Peashooter is the main Protaganist in the show.He has lots of friends

A Green ball with a large mouth and eyes. He has a leaf on his head.He has a long dark-green stem with 4

leaves on the bottom

The Pilot of Awesome

Sunflower Thinks She Can Dance

Love is Gold and Maybe Silver

Hide and Seek or Die

Peashooter Appears to be Brave and Kind,But also tries To do The Right Thing.He is also Sarcastic at times,Making him in The Middle-Class.

Peashooter has been best friends since and end of year Kindergarden party.And after 5 other years they went on amazing adventures and quests.They still hang out Together.

Sunflower is a very close friend of Peashooter.They like skying having fun and Adventuring with Eachother.He tries to tell her that Wall-Nut has a crush on her but always gets interrupted,Which is funny. :)

Peashooter and Snow Pea Being Twin Brothers Always care for eachother.Altough they get into many arguements they still obviously care.

Peashooter is perfectly aquainted with him and loves his puns, pranks and jokes.Peashooter can call him anytime by saying PARTY ALL FLERPING DAY! and he magically apears.He still bugs Starfriut though

Peashooter likes cool inventions,so he always likes Magnet-Srooms inventions too. Except when Peashooter gets impatient He can get annoyed by him

Blover, since the episode "Love Is Gold And Maybe Silver" is Officially Peashooter's Love intrest.Blover likes him back as well.But when Peashooter attempts to get a kiss from her, every time,He fails which is also funny.:D

Peashooter is Zomboss' mortal enemy. he tries to defeat him and the horde of zombies 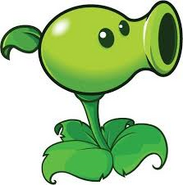 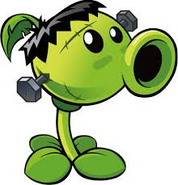 Peashooter in His Halloween Costume in Ledgends of The Lawn!

Peashooter is Upset
Add a photo to this gallery

He is The main Character in a side series called Plantaemon.

He is allergic to Soy

Retrieved from "https://plants-vs-zombies-awesome-adventures.fandom.com/wiki/Peashooter?oldid=4261"
Community content is available under CC-BY-SA unless otherwise noted.